Every release of JDK involves few minor enhancements, which are majorly overlooked under the shadow of major ones, but can be very handy in day-to-day coding. In this article I tried to collate a list of such minor enhancements (taken from JDK 5, 6 and 7), which can really make your code efficient, clean and less error-prone.

Try with Resources (Since JDK 7)

Switch with String (Since JDK 7)

A much awaited feature of Java. Prior to 7, only int or enums were allowed inside switch statement, but with jdk 7, you can also work with Strings inside switch, as shown below:
String day = "Tuesday";
switch (day) {
case "Monday" : //do something
break;
case "Tuesday" : //do something
break;
default : //for all other days
break;
}
Read More: http://docs.oracle.com/javase/7/docs/technotes/guides/language/strings-switch.html

Underscore in Numeric Literals (Since JDK 7)

Many times, while using numerical literals, you found it difficult to read its value for e.g.
long bankAccountNumber = 1007876345678L;
How good it would be, if we can use some separator for better readability (for e.g. if first 3 digits indicates bank’s state wise code, while next 4 for bank code and rest as individual number)? JDK 7 allows you to use as many underscores as you need within the numeric literals. For e.g.
long bankAccountNumber = 100_7876_345678L;
This greatly improves the readability of your code.
Read More: http://docs.oracle.com/javase/7/docs/technotes/guides/language/underscores-literals.html

Prior to Java 7, if you use generics, you need to pass type arguments to call appropriate constructor, but with JDK 7 now that is options hence the code,
Map
Can now be replaced with
Map
This enhances the code readability, and avoid unnecessary repetition of generic parameters.
Read More: http://docs.oracle.com/javase/7/docs/technotes/guides/language/type-inference-generic-instance-creation.html

How many times you need to create an array, may be of single value, just because your method needs array as input? Let’s see the code below

If you fade up using class name for static variables, you can use static import as shown below.
Instead of writing code like
Color black = Color.BLACK;
Color red = Color.RED;
You would write like
import static java.awt.Color.*;
and then use the static variable directly
Color black = BLACK;
Color red = RED;
This avoids the repeating prefixing of class name. But beware, it can reduce the code readability as well. Read More: http://docs.oracle.com/javase/1.5.0/docs/guide/language/static-import.html

There are instances where, although you catch the higher level exception but still, you want to throw specific exceptions. Let’s consider the code below which is valid for JDK 6 and prior versions:

In one of my recent projects, during finalizing the technology stake for a new web application, I got to a situation where I needed to decide the integration strategy between different layers including web and business service layer. The key point to decide here is whether to use the smooth and out-of-the-box integration mechanism provided by the frameworks or use standard J2EE design pattern for framework agnostic integration.


To be specific, we were using Struts 1.3 (I love the simplicity of Struts 1.x MVC framework, apart from all other reasons why we selected it) at web tier, and Spring IoC at business service tear. And the decision to make is whether to use the Spring supported integration with Struts framework (using ContextLoaderPlugIn, extending ActionSupport class, using DelegatingRequestProcessor etc) OR using Business Delegate pattern to completely separate the two layers.


The below 2 diagrams further depicts the 2 possible scenarios. 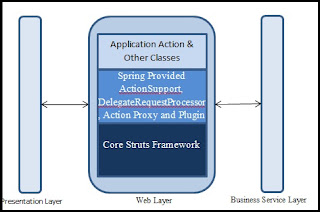 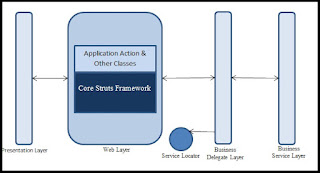 In other words, we had the option of either using Spring support for Struts (using ContextLoader plugin, extend to Actionsupport class etc). The Spring’s Actionsupport class provides easy-to-use methods to get the Spring IOC’s context to get access to service beans. OR we use Business Delegate pattern, in which a separation layer will be introduced between web and service layer. This layer will delegate calls to service layer and provide abstraction. Also, the task of locating the services can be handed over to service locator.


Here is the list of advantages and cons with each of these approaches.
Using Spring provided smooth integration approach


2.      Being a direct communication between web and business service tier, it doesn’t involve other layers and hence a bit advantageous from performance perspective.


3.      The biggest issue with this approach is tight coupling between the 2 layers. Web tier not only knows about the business service tier but also has information about with what name the bean is registered and how to get handle of the bean.


4.      Another issue being that the service tier has direct exposure to web tier and hence web tier knows each core business service. This may result in multiple network calls from web to service tier.


5.      Practically, it would be difficult to deploy web and service tier in distributed manner.


3.      Business exceptions can be handled more efficiently at delegate layer.


4.      The services are located using service locator, which is the only entity has knowledge as where and how services are registered and deployed. This could be very useful in case of distributed environment.


5.      The only drawback is to have additional layer (delegate) and service locator entity in the architecture.


Finally we decided to adopt the 2nd approach, using business delegate pattern and results were quite satisfactory.


Conclusion: Spring provides direct integration with different web frameworks, but to choose it or adopt business delegate pattern, should be pondered well in the given situation. Loose coupling, separation of concerns and abstraction, would always be helpful in long run.


References:
1.       http://static.springsource.org/spring/docs/2.5.5/reference/web-integration.html
2.       http://corej2eepatterns.com/Patterns2ndEd/BusinessDelegate.htm
Posted by Ashish Arya at 3:00 AM 1 comment: